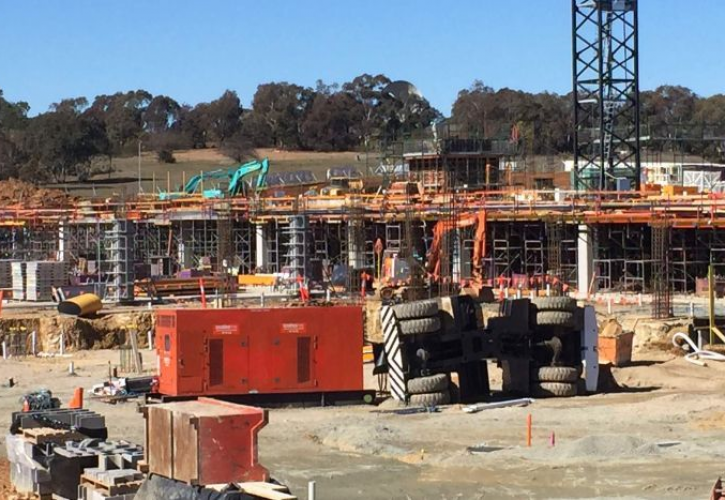 The nine charges, which include a criminal count of manslaughter against a crane driver and workplace charges against company bosses, have been labelled an “extensive and unprecedented” response by ACT’s work safety watchdog. Herman Holtz, 62, was killed on August 4, 2016, after an incident involving a mobile crane on the University of Canberra Hospital construction site in Bruce.

The crane driver, who was moving an 11-tonne generator at the time of the incident, has been charged with Mr Holtz’s manslaughter. WorkSafe ACT commissioner Greg Jones said the evidence suggested there were significant and systemic failures on the site, with workers’ safety not taken into account. “It is alleged that a number of people made several very poor decisions, repeatedly over a period of time, in undertaking that lift,” Mr Jones said. “The risks that were apparent and available to not only the people in the supervisory or a management role, but particularly those on-site. Mr Jones drew attention to the choice of mobile crane for the job and said a “strong regulatory response” was required.

“The evidence gathered under this investigation suggests that the risk of serious injury or death in what they were doing was obvious and readily apparent. “However, despite the risks, they continued in their task which resulted in the mobile crane exceeding its design capabilities to such a degree that it overturned with tragic consequences.

Category-one offences, which are handed down for “reckless conduct” and are the highest possible charge under the work health and safety act, were laid on principal contractor Multiplex Constructions and sub-contractor RAR Cranes. The ‘dogman’ who was assisting the crane driver at the time of the accident as well as the site’s supervisor and safety officer, both of whom were employed by Multiplex, were also accused of reckless conduct.

Multiplex Constructions’ chief executive and RAR Cranes’ managing director were both slapped with category-two offences for failing to comply with health and safety standards, as was the site manager on the day, also employed by Multiplex. If found guilty of a category-one offence, individuals can face up to five years in prison, while corporations can be ordered to pay up to $3 million. Category-two offences can carry financial penalties worth hundreds of thousands of dollars, while a corporation can be hit with a $1.5 million fine.

Story by ABC News By James Fettes and Jon Healy