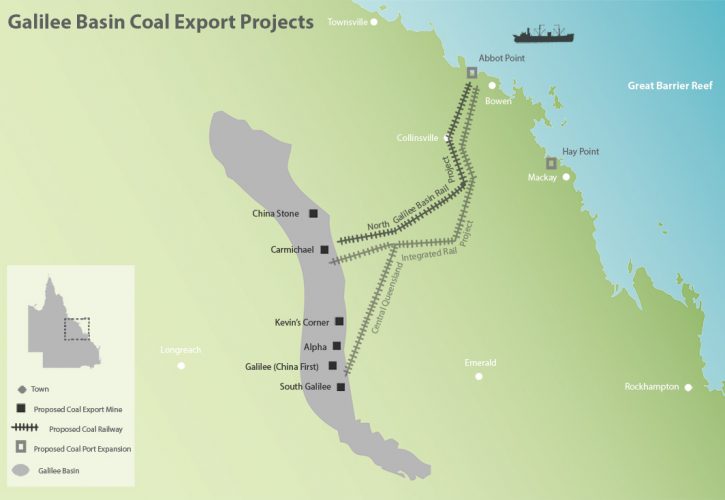 Queensland Government has given the green light to the Carmichael Mine which will set a precedent for six other mines also planned for the region and allow Adani to break ground within weeks.

The Queensland Resources Council (QRC) said the other projects would have a “much easier run” if the rail line was already established and the environmental approvals had been cleared.

QRC chief executive Ian Macfarlane said Adani was “actually the ice-breaker that will lay down those baselines and will provide the infrastructure”.

There have been six other mine project proposals put before the Federal Department of Environment and Energy and of those, two belong to Clive Palmer’s Waratah Coal and two to GVK Hancock which is part-owned by Australia’s richest person Gina Rinehart.

Palmer’s Waratah Coal has been granted 12 coal exploration permits in the Galilee Basin and has applied for two mining leases covering approximately 220,000 hectares of land — a total area greater than the Gold Coast.

Waratah’s tenements would produce more than 120 million tonnes of coal per year in total.

GVK Hancock is a partnership between Hancock Prospecting and Indian infrastructure company GVK.

In 2008, it was the first company to propose a Galilee Basin mine.

The other two mines belong to MacMines Austasia and a subsidiary of the AMCI Group.

The seventh mine belongs to AMCI Alpha Pty Ltd — a subsidiary of US-based resources giant the AMCI group.

If you are wanting to work in a Qld Coal Mine you will require a Standard 11 Mining Induction Card. Click here to find out more.